During this ecology project, we learned methods and skills in order to push our way through this project.  I think one of the most helpful methods that educated me on skills was the guest speakers that came into our class .

I think the two most significant things I did during this project, was the trail work and the exhibition.  The reason these were the most significant events is because, they were where I learned the most knowledge about ecology.  Working with trails 2000 at horse gulch was a good learning experience because of the ecology lesson we did.  At the exhibition, I got to go around and learn about all kinds of different events from different group projects.  I felt like I mostly contributed at horse gulch by helping build the new trail.  At the exhibition I had the chance to present my infographic, which I worked very hard on.  My group members all took turns explaining our project to people.  I felt like I was a big contributor in participating in this exhibition by sharing our project with people there.

I think some of the difficulties our group experienced during this project was getting our infographics done on time.  However we pushed through it and everybody got there infographics done on time.  On the other hand, I had major difficulties with my infographic project.  On the day it was do, I some how lost my project on vengage.  I had to redo my whole infographic in one night.  luckily, I was able to get it done in time for the exhibition so I could present it.  In terms of our group collaboration, I thought that we were very focused and motivated to create a good project.

When we first got our groups, I assumed that we would get distracted a lot and that one of the students might have to do most of the work.  After working for a few days, I was proved wrong.  Our group ended up working very well together, and we all had an even contribution to the work load.  I also assumed that I might fall behind a little in what we were doing, but I was able to keep up with the rest of the group and what was going on.

After our project, I learned a lot of information about bear and human conflicts that I would have never thought about before.  For example, I knew that bears  would get into people's trash cans, but I never thought about the fact that they would get into birdfeeders.  Another really interesting fact I learned about bears is that they can find a specific location even after they have been relocated over 50 miles away.  Another fact I learned was that it is a felony to kill a female bear.  However, the do allow a short hunting season for male black bears in the fall.

If I could do this project again, I would make it so we had more time to work on our infographics.  I noticed a lot of people were stressing about the amount of time they had to finish.  If we had a little more time on our infographics, I think that people would take there time and complete better work.  Another thing I would want to do is instead of each person making an individual infographic, everyone in a group would all complete one large infographic with lots of information.  Everyone in the group would help contribute by adding information on the infographic.

In the future, I am thinking about studying biology or working for the division of parks and wildlife.  This information could be very helpful throughout college and getting a job.  It is also good to know in case we do another project like this in the future years at school.  What I thought was one of the most important things this project taught me for the future is to be more cautious about black bears and how they can cause problems.

I wish I had better research skills prior to this project.  I sometimes have trouble finding good reliable websites for good information which can sometimes make it hard for me.  Another thing I wish I had more experience with is creating infographics.  Before this project, I had never created an infographic before;  I didn't even know what it was.  When I first started my infographic, I was very confused on what to do considering I had never done one before.  I feel like if I had had at least some experience with infographics, It would have made the project a lot more enjoyable and easier for me to complete.  Another thing I wish I had more experience with is better communication so I could communicate with the group more.

I think the activities in this project fit my learning styles most of the time.  One of the activities we did that I really enjoyed was the trail work.  The horse gulch portion of this project was the part I enjoyed the most because it was a good learning experience.  I also thought the guest speakers that came in were also helpful for providing good information for this project.

I think after working in this project, I will want to participate more in future projects.  I realized that by helping out in the group more often makes the project more fun.  Also, at the exhibitions if there is one, you are more prepared to explain what your project is about to other people.  I have had it happen in the past where I have not been as engaged in a group project as I should have.  As a result, I did not get a gould grade, or have trouble explaining it to other people.  In the future, I will always make sure to keep track of all of my work so I don't lose work like I did when I lost my infographic and had to redo it.

​1.The purpose of our movie project was to all work together as a group to make a movie with a genre of our choice.
I felt like I really stepped out of my comfort zone to meet the purpose of this project.  The main reason why I say this is do to the fact that I stepped up and chose to be an actor in some of the scenes.
As a whole class, we really did a great job.  During the process I noticed some people were really losing there patience and getting frustrated which I see as a sign of care that shows we want to create a good film.

2. like I said before, I am really glad that I made the decision to act in some of the movie scenes, which I think in return raised my confidence.
As a whole class, I can not think of one moment where we were off task during the making of this film.

3. I think the main challenge for me was my constant worry about forgetting the lines I had to memorize and feeling like I wouldn't be able to memorize them.
As a whole class, I think we could have been a little more focused.  What I mean by this is not that we were not on task, which I brought up that we did well before, it is the fact that people could have tried a little harder to act out there roles a little more professionally.
I think in the future, a good way to improve this would be to do just a short, at maximum, a week long lesson on acting skills to show people how to act in a movie to make it seem more real.
Collaboration in this project was the communication between students.  For example, I was highly encouraged by some of the students to memorize my lines before I was filmed.
In this project, my collaboration was to try and help as much as I could making the movie, mostly through acting.

4. If I were to do this project again, I would try to do more than just acting, this could include, filming editing, etc.
What I would like to see change about this project would defiantly be timing.  Because we also had the time and space project going on, it really stressed people out because of the little time we had to work on it.  I think we would make a better movie if we had more time to do it because we would be able to think more clearly without rushing to get it done.
What I would keep the same about are project would be our great teamwork! Below is the process of how we made the film. 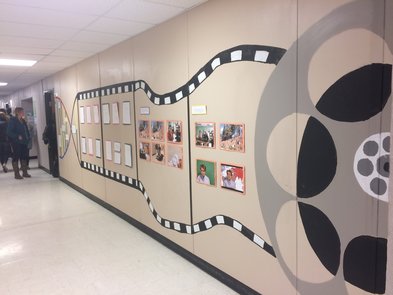